Michael's Blog of the Digital Past

The Power of Points

According to Edward Tufte powerpoint presentations, and other related software, is a plague ruining the intellectual integrity of modern discourse. He describes it thusly:

Imagine a widely used and expensive prescription drug that promised to make us beautiful but didn’t. Instead the drug had frequent, serious side effects: It induced stupidity, turned everyone into bores, wasted time, and degraded the quality and credibility of communication.

“Slideware presentations” was originally used by the military to quickly list bullet points of crucial data during briefings. It seems these crude presentations are the only places they should belong. With it’s rise in use in the academic and corporate worlds, people have lost their abilities to persuasively orate, choosing to present their ideas with low quality graphics instead of passionate speech. Tufte goes so far as to claim that schools, who can spend an entire week on power point presentations, should instead take the week off, “and everyone went to the Exploratorium or wrote an illustrated essay explaining something.”

Yet how much truth to these arguments are there?

First of all, how should power points be used? Ethan Rotman states, “A speaker needs to carefully decide what to say as well as what not to say to bring the audience to the desired end. The visual aids presented should compliment, not duplicate, the words.” He goes on to explain that one of the common mistakes of power point is, “Projecting their notes or entire script on the screen”

PennState University explains that you should “Simplify and limit the number of words on the screen.” using text “as little as possible.” avoiding “paragraphs” and using “good quality images that reinforce your message.”

According to a communications study at the University of Alabama,

“… teachers who augmented their face-to-face presentations with technology were generally perceived as being more credible than those who did not employ technology.”

Yet they also found,

that augmenting a presentation with bulletpoint text visuals can have a positive effect on audience recall of presented material.

Here we have two opposing view points. One, lead by Tufte and Norvig, stating that powerpoints undercut the importance of effective oration, and another point saying that if powerpoints are used effectively, they increase retention and reinforce your message.

What conclusion can we, astute observers of digital history, make? 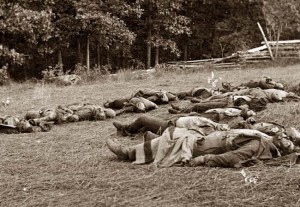 Our conclusion must be that utilizing visual-aid-software can increase the impact of the points we’re making, but we need to use the slideware effectively and carefully. It in no way should replace our written or oratory skills, but instead reinforce the arguments we’re making.

As the University of Alabama’s Communication Study suggests, exactly what constitutes as “effective” is up to debate, but in my opinion, if you feel confident enough in your presentation that you felt you could make a strong and powerful case without the aid of slideware, you should be fine.